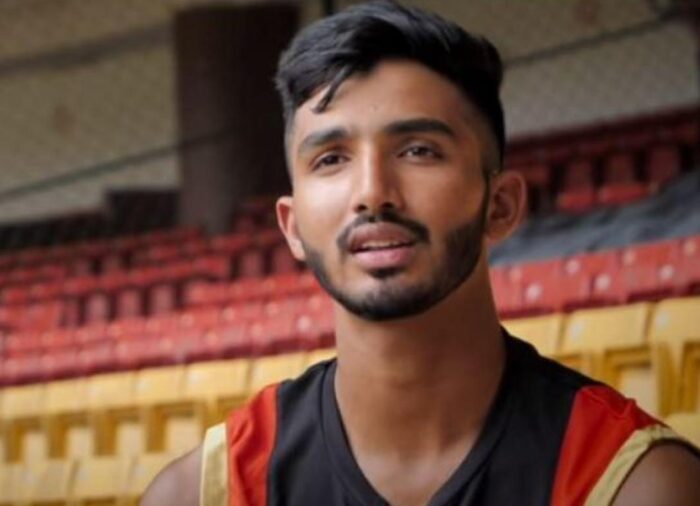 – Hi, guys! My name is Danish. Welcome to Myntra Presents Bold Diaries, and with me is one of RCB’s brightest stars – Devdutt Padikkal. He’s emerged in the last one year and has made such a big dent in the system. Dev, thank you very much for joining us. I want to begin by asking you about the Indian call-up. Just within a year of you playing for RCB and you happen to be the first player to play for India after being born in 2000. It must be an incredible feeling, man?

– Yeah, definitely. It took me some time to settle in there and once I, you know, got into it and once I started practicing I just realized how blessed I am to be there, you know, to get that opportunity to be part of the Indian team and, you know, represent my country. It was something very special.

– It happened so quickly. Have you had the time to process it?

– Yeah, it took me some time, definitely it did. But, yeah, I knew that at some point in my career I want to get there and that’s the ultimate aim, you know. To play for your country is what you play this game for, so once I was there, yeah, it was a really great experience.

– So, when you got the Indian team call-up, do you remember what the scenario was? What exactly happened? Were you at home?

– Yeah, I was at home. There were rumors around that they’re going to announce the squad that day, so we were all just waiting and refreshing our pages, and refreshing the website, and everywhere to see when it’s going to come out eventually. And, yeah, once it came out, I think it was my coach who sent me the team first so, yeah, after that there were just messages, and calls, and hugs, and everything like that, so, yeah, it was a really wonderful experience to be part of.

– So I’ve spoken to some players in the past who have said the only way they figured they made it to the Indian team was by looking at a newspaper article the following day. Thanks to the Internet you heard people refreshing pages, so whom did you call first?

– It was my coach. Actually, I think he was the first one who sent me a screenshot of the squad. So once I saw that I immediately called him and, yeah, he just congratulated me.

– And what is this sir’s name?

– His name is Nasir.

– He’s from the academy I go to and he’s been with me since I was probably 11 years old. So he’s been someone I have always been with, so the first thing I did was call him.

– Obviously, Nasir has played a big part in your career. And now, to look at RCB as a franchise… Playing here, how has that sort of motivated and pushed you into the Indian team?

– Yeah, definitely, IPL is a platform for every young cricketer to, you know, come and showcase what they have. And over the years it’s played such a huge role in, if you know, so many cricketers’ getting through to the Indian team. And to get that opportunity at this age was something that I couldn’t have even dreamt of. So once I did get that opportunity and they stuck with me throughout the season and, you know, they believed in me and, you know, that gives you a lot of confidence for going forward as well. So, definitely, this was a huge platform for me.

–  Dev, the kind of people you’ve been working with, be it at RCB or be it the coach that you’ve mentioned, and then to make it to the Indian team and again be sort of mentored by Mr Rahul Dravid… It must have been special. How did that or rather how has that impacted you?

– Yeah, the thing is, I had worked with Rahul sir before, once or twice, and I had spoken to him, once or twice, so I knew him before that as well, so it was very easy to, you know, really connect as soon as I was there. Obviously I was in know of the person he is and the gentleman that he is, so it was great to, you know, work with him and just learn as much as I can. And it was not just him, it’s the entire squad, the seniors in the team, and just the whole setup of an Indian team is different, and to be part of that and to learn from them day in day out was something incredible.

– So, let’s break this down, right? You make it to the Indian team. You’ve got this New Jersey. Did it reach your room, did it come home?

– Yeah, it was given to us in the room when we were in quarantine.

– And you were by yourself there?

– How long did you spend just touching that?

– Yeah, for probably four or five hours I was just wearing that Jersey as soon as I got it. So I was just clicking pictures and sending them to my parents and friends, and stuff like that. So I was just very excited as soon as I got it, you know. I still remember, once one of my parents, I think mom, although I’m not sure, they got me an Indian cap like the ones that you get at stores, and they gave it to me and I was like, “I’m not wearing this.” So I was like “I won’t wear it once I get the actual one.” And the day I got it I was just wearing that the whole time. So, yeah, that was a special moment for me.

– And when you got out of quarantine and met the entire team, what did Rahul Dravid say to the team? Because there were too many of you, young guys, who were playing for the first time for the country. I’m sure there was a lot of experience imparted. Do you want to share a few things with us?

– Yeah, definitely it was a great bunch of guys. You know, everyone was looking to learn and everyone was ready. And, you know, they wanted to take as much as possible from that experience, because it’s not often that you end up having two Indian teams at the same time. And when you do get that opportunity and when you are part of the Indian setup, there’s so much you can learn from each and every one. So that’s what even Rahul sir and everyone out there just asked everyone to do. So, like, it may be our first season, a first, you know, tour with the Indian team, but everyone has played a lot of cricket and everyone has played a lot of IPL games and stuff like that. So everyone could learn from each other, and, you know, pick up whatever little they can in that two months. And everyone wanted to just make sure that at the end of the whole tour we learned something new and, you know, enjoyed our time there.

– I remember we were travelling in the bus back from our little football game that we had at RCB, and you were joking about the food that comes to club cricket. And when you look at something that you’ve gone through with the Indian team, isn’t it drastically different?

– Yeah, definitely, this journey is a long one and definitely at the end of the journey you get a lot of good things. But there’s a lot of things that go behind a lot of things that you’ve gone through from, you know, just the age of 10 or the age of 11. And just to get there eventually is a huge achievement. And that’s why for everyone who’s played for India it’s a remarkable achievement, and to get there is something incredible.

– And we’re all incredibly proud of you.